Celebrating 50 Years of the UK’s Continuous at Sea Deterrent

2019 marks the 50th anniversary of the UK’s Continuous at Sea Deterrent (CASD). Since April 1969, there has always been a Royal Navy Ballistic Missile Submarine at sea, providing the nation’s deterrent and ensuring the UK remains safe.

Today, the UK’s strategic nuclear deterrent is provided by the Vanguard-class submarine, the first Vanguard-class was named HMS Vanguard and was launched in 1993. The Vanguard-class is the cornerstone of the UK’s defence and international policy, significantly contributing to the UK’s security and economic prosperity.

The Dreadnought class, the next class of ballistic submarines is currently under construction and is expected to replace the Vanguard-class by the 2030s, ushering in a new era of at-sea deterrence. The UK’s Continuous at Sea Deterrence is the longest ongoing operation ever delivered by the Ministry of Defence and has provided generation after generation with highly-skilled jobs and skills.

In his opening remarks, the Defence Secretary said:

Half a century ago, HMS Resolution glided into the Clyde and sailed into the history books. That was the start of our longest sustained military operation—Operation Relentless—and the beginning of our continuous at-sea deterrent. Since then, there has always been a Royal Navy ballistic missile submarine at sea protecting our nation, and thousands of submariners have followed in the wake of Resolution’s crew conducting vital work, unseen and undetected, every minute of every day.

The UK’s Defence industry is at the core of the UK’s nuclear deterrent, with CASD supporting over 30,000 jobs in every corner of the country, and making a significant contribution to the UK economy for decades to come. 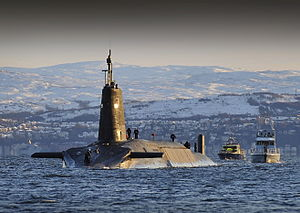