In a joint blog post, ADS’s Defence Director, Caroline Donaghy, and Security and Resilience Director, Hugo Rosemont, provide an update on the briefing programme offered to members in their sectors in the current context.

Given the modus operandi of “working from home” during the COVID-19 pandemic, ADS’s Defence Sector team has shifted its traditional face-to-face briefings to webinars aimed at ensuring dialogue flows between members, government officials and organisations such as the DIT DSO and the UK Defence Solutions Centre (UKDSC).

With the UKDSC we hosted a joint webinar aimed at spreading information about the work of the UKDSC, highlighting in particular its Community of Interest (COI) Innovation Portal and Cross‐Sector Innovation activities: Subsea Autonomous Systems, Energising Defence, and High Altitude Intelligence. These topics helped stimulate questions from the audience, creating an interactive environment, between, UKDSC and the SME community.

The defence team have hosted public policy sessions (on DSIS jointly with the Security sector and the HMG team, on Climate Change & Sustainability in Defence with senior MOD officials) and engagements with Front Line Command, including one briefing on 19th June with Air Vice-Marshal Johnny Stringer CBE MA RAF on multi-domain integration.

In addition, we have also collaborated and spoken at export related webinars in relation to markets in Asia Pacific and Latin America. With an ever increasing focus on capability requirements abroad we remain committed to exploring export opportunities

We have a series of briefings lined up including the popular Land Capability Industry Symposium 1st July.

In the Security and Resilience sector, similarly, we operate a monthly Security Briefing series for members, in which we invite senior representatives of key stakeholder organisations from across the public and private sectors to address members on their priorities, followed by a Q&A session. These briefings provide an important opportunity for all members to hear first-hand from key decision-makers, programme leaders and other influential representatives from organisations engaged in the environment in which our members operate. With all briefings held under the Chatham House rule to allow for an open exchange of ideas, briefings are normally held at the ADS London office, but we changed this to a webinar format in the COVID-19 context.

As an example of what members can expect, in late June we hosted Anita Friend, Head of the Defence and Security Accelerator (DASA), for a briefing which attracted over 100 attendees. DASA is a key organisation in harnessing the potential of both the defence and security sectors, with its core mission being to find and fund exploitable innovation to support UK national security quickly and effectively, and support UK prosperity. Anita spoke around the strategic and tactical priorities for DASA, including messaging to the private sector that DASA is a key interlocutor between industry and academia and those in Government. She highlighted the need for innovation efforts to be stepped up, including taking on projects which are higher risk and needed to drive the sector forward. Reference was also made to the need to bridge the gap between national security and defence requirements – which are becoming increasingly intertwined – in order to maintain the UK’s strategic edge.

Beyond DASA, we have previously hosted well received briefings from key stakeholders including the Director General of the National Crime Agency, the Director General of Border Force, directors in the Home Office and Foreign Office, as well as senior figures in the finance and insurance industries. Since the COVID-19 restrictions we are grateful to our stakeholders for continuing to engage in a digital format, which has included a Director from the Office for Security and Counter-Terrorism (OSCT). We now intend for our Security Briefing series to continue to run in a digital format until we are able to return to the normal office setting, and on 2nd July will host the next in the series with the Commissioner of the City of London Police, Ian Dyson, and would encourage all members to register for the event on the ADS website (HERE).

To keep appraised on full details of all of ADS’s upcoming events and webinars, visit our website HERE. 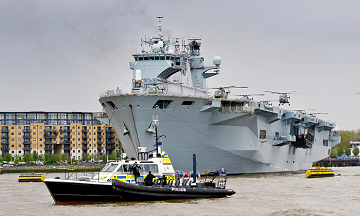