Today the Airbus Beluga XL had its debut flight in the UK, flying over some of the UK’s hubs for innovative technology that are at the forefront of the next generation of air-travel, in Bristol and Filton, and finally landing at Airbus’s Broughton site.

About the Beluga XL

The Airbus Beluga XL is a large transport aircraft which is due to enter into service this year. It is based on the A330 airliner, and it will be the successor to the Airbus Beluga. It has been designed, built and will be operated by Airbus to move oversized aircraft components.

The aircraft is named after the mammal it represents and sports a smiling whale’s face which has become distinctive to the aircraft worldwide.

After being produced in 2016, it made its first flight on 19 July 2018 from Toulouse, France but today the aircraft has flown across the UK as part of a 12-month long testing programme.

The UK’s Aerospace sector is world-leading, generating high-tech exports and sustainable growth across the country. With 123,000 employees in all corners of the UK, including some 4,000 apprentices, the sector generates £35bn a year for the economy and has had 39 per cent growth since 2012.

It’s no surprise that the Beluga XL made its maiden journey over Bristol and Filton, home to Airbus in the UK and other Aerospace companies.

Airbus’s Filton production site is responsible for wing assembly and equipping the A400M multi-role airlifter. The Filton site also is responsible for the design, engineering and support for Airbus wings, fuel systems and landing gear integrations, as well as being at the forefront of pioneering aerodynamics research and development.

The Beluga XL was even caught on camera by those who lived in Chester and Broughton, another site for Airbus which assembles the wings for the entire family of Airbus commercial aircraft, including engineering and manufacturing in wing box assembly and wing skin milling. 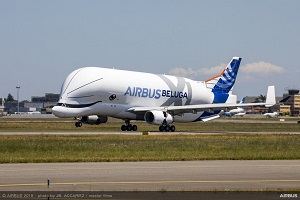