Missions and Aims of ARIA

Cummings stated that he wanted ARIA to be like the original Advanced Research Projects Agency (ARPA), which was an American funding body set up in 1958. He highlighted how ARPA had given space for people to find problems that needed solving.

Cummings argued that the purpose of ARIA would be to sample the ‘broader design space’ of science and technology and that its aim would be to accelerate scientific discovery far beyond what is currently normal, to seek strategic advantage in S&T fields for the UK. He also asserted that freedom would be more important than money for ARIA to succeed, with ideas like the internet, that have created tens of trillions in value, only needing a budget of a few hundred million dollars in today’s money.

Cummings believed that a large percentage of ARIA projects should fail or have unworkable ideas to demonstrate that it was taking enough risk. Indeed, he thought that the organisation should be based on venture capital models, where returns come from a tiny number of successes with a lot of failures, as these failures would lead to increased innovation. He stated that ARIA should be judged on a failure percentage, rather than one of success.

The Secretary of State stated that the mission of ARIA would be decided by the people who are hired to run it but asserted that he was keen to have the Government’s innovation strategy as part of the organisation.

In his evidence Dominic Cummings railed against the amount of time he believed was wasted by researchers filling out forms, stating that such an approach prevents the development of new and innovative ideas because these often have unpredictable outcomes, with current research funding organisations wishing to know the predicted outcome of research in advance to safeguard taxpayers’ money.

Shanmugalingam informed the Committee that BEIS will shortly commence an independent review of bureaucracy across the higher education system so UKRI can make the best use of its funding, but the Secretary of State vied that UKRI was not mired with red-tape and was effective for what it is doing.

Cummings was explicit that ARIA would be receiving new and additional money, and that UKRI should get generous increases over the coming years in the spending review. Indeed, Shanmugalingam stated that BEIS are continuing to support UKRI alongside ARIA, as set out in the R&D roadmap last summer.

Science Research in the UK

Cummings argued that the problem with UK science funding more generally is an inability to plan long-term, which he believes is damaging for the field. He added that funding of 2.5% of GDP for S&T is not enough and that the UK should look to spend proportionally at least as much money as countries who take a more aggressive approach to S&T research. Whilst China and the US are spending new money fast in these areas, Cummings asserted that most of what they are spending is in the current S&T realm and not in the ‘untouched design space’, so the UK could do things differently and see great returns for its investment.

You can watch the Committee session here. 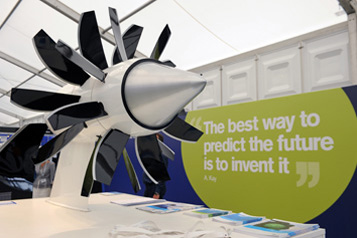